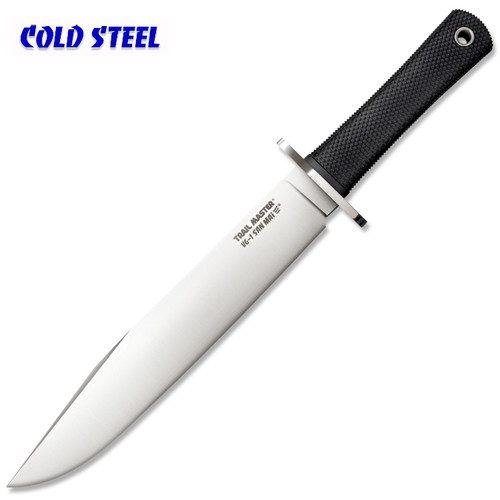 Why buy a Trail Master? That's simple. Because it is, without a doubt, the most knife for the money ever commercially built! In terms of sharpness, edge holding and strength, it will out perform by a wide margin any factory made knife and 99 percent of all hand forged knives as well! Cold Steel knows they're "going out on a limb" with that statement, but since 1987 they have challenged the industry to make a better knife and yet, to this day, they've had no takers.
The broad clip point of the blade is extremely resistant to bending or breaking. This is largely due to the fact that the tip is actually thicker near the point than what's found in most bowie knives. This, however, does not mean that the point is dull or blunt. On the contrary, the point is almost needle sharp and offers tremendous penetration. Plus, the blade-back is equipped with a slightly concave false edge that measures approximately three and a half inches long. Every Trail Master's edge has been honed by hand, then given a high speed buff until it is truly razor sharp and capable of easily shaving the hair off one's arm. This knife is so sharp it will cut at the slightest touch. The Trail Master balances approximately 3/4" in front of the guard for a slightly blade-heavy feel that is ideal for delivering heavy chopping and slashing strokes. The Trail Master's Kraton handle is 5" long and deeply checkered for a non-slip, shock absorbing grip. What's more, its contoured cross section helps prevent the knife from shifting or turning in the hand when striking full power blows. The double guard is very study and rigidly fixed into place. It is long enough to keep fingers off the blade, yet short enough to avoid being tangled in clothing or equipment when the Trail Master is drawn.

VG-1 San Mai III -- If you want a bowie knife that requires minimum maintenance and is practically immune to water, salt, air, or the humidity of a jungle environment, the VG-1 San Mai III Trail Master is for you! This Bowie will outperform any other stainless steel Bowie in the world in terms of strength and toughness. And, as an added bonus, this Trail Master is equipped with a beautiful rolled edge, capable of easily severing 4" or more of free hanging manila rope!

More about San Mai III steel:
San Mai means "three layers". It's the term given to the traditional laminated blades used by the Japanese for swords and daggers. Laminated construction is important because it allows different grades of steel to be combined in a single blade. A simple way to think of this type of construction is to imagine a sandwich: The meat center is hard, high carbon steel and the pieces of bread on either side are the lower-carbon, tough side panels. The edge of the blade should be hard to maximize edge holding ability, but if the entire blade was hard it could be damaged during the rigors of battle. For ultimate toughness the body of the blade must be able to withstand impact and lateral stresses. Toughness is generally associated with "softness" and "flexibility" in steel, so that, surprisingly, if a blade is made "tough" the edge won't be hard enough to offer superior edge holding. San Mai III provides a blade with hard (higher carbon) steel in the middle for a keen, long lasting edge and tougher (lower-carbon) steel along the sides for flexibility.