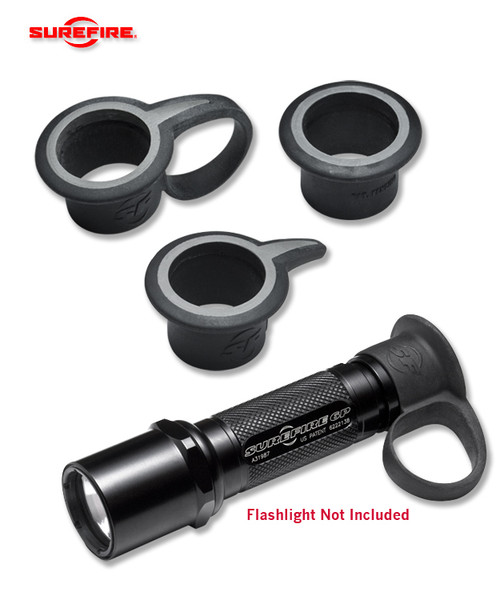 SureFire Combat Rings solve two major problems tactical professionals have long faced when pairing a tailcap-activated flashlight with a handgun: (1) they minimize flashlight deployment time by providing an easy-to-grab non-slip hold and (2) they allow a shooter to securely hold and activate a flashlight without compromising sound shooting fundamentals. Combat rings slide over any one inch diameter tailcap, enabling a shooter to activate the flashlight with his or her knuckle, using the Graham Method. Combat Rings are also unobtrusive and don't interfere with a shooter's ability to reload or perform other basic shooting maneuvers. They are sold in sets of three. Each Combat Ring kit includes a Combat Ring, a Combat Hook, and a Combat Loop allowing a shooter to choose the ring that best meets his or her needs. Made from a durable polymer core and a neoprene overmold, patent-pending Combat Rings effectively allow the pairing a handgun with a flashlight in low-light situations. Fits flashlights with a 1” diameter tailcap.