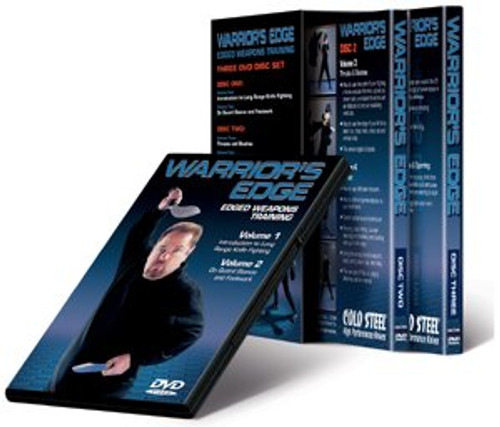 In the Spring of 2002, Cold Steel introduced the original Warrior's Edge VHS videotape collection. Since its introduction, it has proven to be quite popular. However, technology is always improving, and, just as the compact disc has replaced the black vinyl record, so has the format of home video entertainment changed. So to meet the demands of a changing world, Cold Steel has decided to put the Warrior's Edge into DVD format. The old footage from the original Warriors Edge VHS proved unsuitable to the new DVD format, so Cold steel re-did the entire production, using three cameras and much improved production values. This version even has additional material that was not presented in the first version!

A Message From Lynn C. Thompson:
As many of you know, I am not enamored with the oft repeated saying: "If you get in a knife fight, expect to be cut." The reason is that this saying condemns even the highly skilled knife fighter to be wounded, disfigured, disabled or even killed if ever forced to put his training with a blade to the test. This is why for the past ten years, I have spent an enormous amount of time in full contact sparring with my training partners to develop a knife fighting method that allows the properly trained fighter to vanquish his enemy with minimal risk of being cut or stabbed in the process. During this developmental period I have borrowed heavily from Western Fencing, and Filipino Martial Arts, including Lameco Escrima, Japanese Ken Jitsu, and Western Boxing as well. I have even added techniques and methods that are entirely my own.
The result of this effort is a knife fighting method which stresses the avoidance of close range in favor of long range techniques aided by footwork, rhythm, timing, speed and superior tactics and strategy. Recognizing that many of my customers can't attend our seminars on this subject, I have condensed our basic course onto 3 DVD's so you can now study, and train in the comfort and convenience of your own home. What's more, I guarantee that if you study them faithfully and practice diligently with a training partner you will gain the skill and ability necessary to give you a huge advantage if ever forced to defend your life or a loved one's with a fighting knife.
- Lynn C. Thompson, President, Cold Steel, Inc.

Disc One: 1 hour 52 minutes
Volume 1 - Introduction to Long Range Knife Fighting:
Subjects covered will be three ranges of knife fighting, and the types of knives you may encounter and demonstrations of their cutting and piercing power. Other topics include, how knives may concealed, how to make a Cold Steel style training knife, why your knife must be strong and sharp, and how to grip the fighting knife.


Volume 2 - On Guard Stance & Footwork:
This tape teaches the clock concept, our basic on guard stance, common mistakes made in assuming the fighting stance, and footwork, including forward, backward, lateral, diagonal, and circular movement as well as the replacement step, lunge, flech and leaping attack. This is an absolute must have DVD as there are no knife fighters of any consequence out there who dont possess superior footwork.

Disc Two: 3 hours 18 minutes
Volume 3 - Thrusts & Slashes:
How to use the point of your fighting knife to execute the rake, speed jab, power stab, and pe thrust as well as elliptical and circular stabbing methods. Also taught on this volume will be how to use the edge of your knife to slash cut, chop, hack, snap cut and vertical whip as well as the 12 angles of attack


Volume 4 - Defense:
How to use defensive footwork, defend against attacks on your knife hand, evasion patterns and techniques, parrying, stop hitting, counter slashing and stabbing and blocking with your knife edge. Also taught will be the use of the empty hand to stop-hit, beat, parry, block, tap, and chop with, and the concept of Mai, or judging distance will be covered.

Disc Three: 1 hour 55 minutes
Volume 5 - Offense:
How to recognize and exploit the 21 common openings or weaknesses in your opponent's defense.The five principles in creating openings and the 11 pillars of strategy


Volume 6 - Training Drills and Sparring:
How to perform training drills that will develop the skills and attributes you need before proceeding to spar. Also actual sparring instruction and demonstrations.

Cold Steel VDFSK - Self Defense with the Sjambok - DVD Set