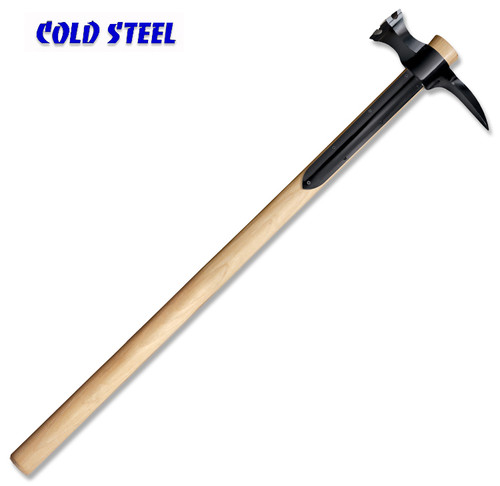 At the end of the 13th century, the sword ruled supreme as the primary weapon of Knights and Men-At-Arms. However, with the introduction of steel plate armor, the popularity of the sword as a battlefield weapon began to wane. You see, the problem was the sword couldn't cut or crush steel plate and had to be specially designed for use only as a thrusting weapon if it was to have even a chance at piercing plate armor. Enter the War Hammer- an ideal weapon for use against an opponent who is encased in plate steel. The heavy hammer head could crush the strongest helmet or suit of plate armor with just a few blows and the back spike could rip through helm and plate like a modern can opener! In battle, the hammer side was usually employed first to knock down and stun an enemy. Once he was on the ground, helpless, the hammer was reversed and the back spike was used to punch a hole through the helmet and deliver the coup de grace.

Now you can own this inexpensive, yet highly effective recreation of this awesome weapon. Weighing a little over 2 1/2 lbs., the Cold Steel War Hammer is highly maneuverable and can be easily wielded with one or both hands. The head is drop forged out of 5150 steel and differentially heat treated. This means the point of the spike and enormous hammer face (1 1/2" x 1 1/2") are fully hardened so they can pierce and crush tough materials without failing while the rest of the hammer is left soft to absorb the shock of heavy blows.

The handle of the War Hammer has been designed to be equally tough. Made of straight grain American Hickory and measuring 30" long it provides tremendous leverage so enormously powerful blows may be struck. To protect the handle from assault by an opponent armed with an edged weapon, a pair of sturdy steel langettes is included, which can be attached below the head with the screws provided. Some assembly is required. Instructions are included.

More about 1055 Carbon steel:
1055 steel is right on the border between a medium and a high carbon steel, with a carbon content between 0.50%-0.60% and with manganese between 0.60%-0.90% as the only other component. The carbon content and lean alloy make this a shallow hardening steel with a quenched hardness between Rc 60-64 depending on exact carbon content. These combination of factors make this one of the toughest steels available because, when quenched, it produces a near saturated lathe martensite with no excess carbides, avoiding the brittleness of higher carbon materials. This steel is particularly suited to applications where strength and impact resistance is valued above all other considerations and will produce blades of almost legendary toughness.