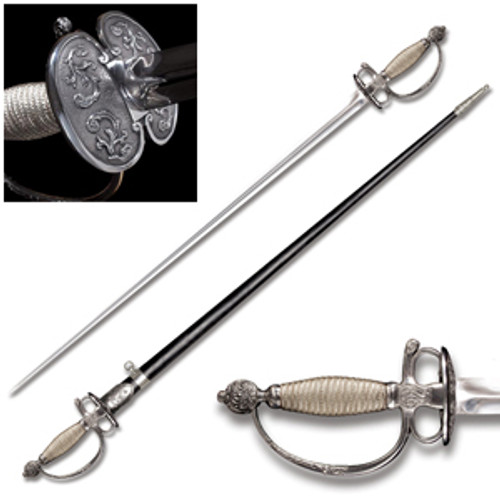 The advantage of the sword point over the edge became increasingly evident by the end of the 16th century. The Rapier, with its long, elegantly thin profile which emphasized its point, became the popular choice in civilian self-defense. It was however a somewhat unwieldy weapon especially when it was used in narrow, crowded streets and alleyways. Eventually a more sophisticated, shorter and lighter version emerged that by the end of the 17th century had evolved into an entirely new weapon, the Small Sword.
Civilians carried it for as long as swords remained an integral part of fashionable dress. Its primary advantage was its stiff, lightweight blade which was forged in a triangular cross section. It was a highly lethal weapon, ideal for thrusting, and hung conveniently from a sash, baldric, or belt. The hilt (compared to the Rapier's) was simple and smartly functional, consisting of no more than an elliptical plate, or two shells and a light knuckle guard.
The Cold Steel Small Sword duplicates the original model in weight, balance, triangular cross section, and deadly sharp point, but uses modern materials like 1055 Carbon steel, heat treated to a tough spring temper. The hilt features two shells with functional finger loops and a light, but strong, knuckle guard. Perfectly balanced and weighing only 22 ounces, the Small Sword comes complete with an attractive leather scabbard that features an intricately decorated throat and chape.
Ground shipments only. No sales outside USA.

More about 1055 Carbon steel:
1055 steel is right on the border between a medium and a high carbon steel, with a carbon content between 0.50%-0.60% and with manganese between 0.60%-0.90% as the only other component. The carbon content and lean alloy make this a shallow hardening steel with a quenched hardness between Rc 60-64 depending on exact carbon content. These combination of factors make this one of the toughest steels available because, when quenched, it produces a near saturated lathe martensite with no excess carbides, avoiding the brittleness of higher carbon materials. This steel is particularly blades of almost legendary toughness.</p