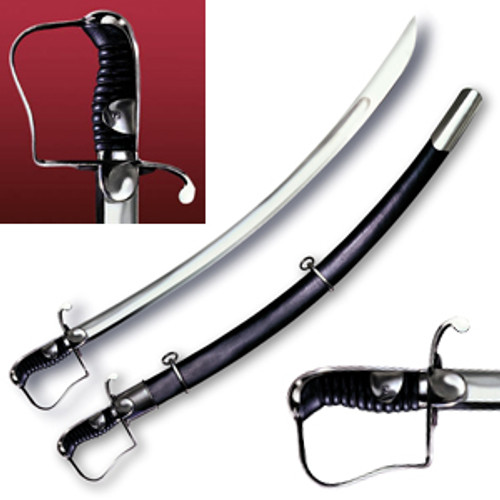 This saber was widely used by the British and their Prussian allies under General Blucher in the Battle of Waterloo. The blade was derived from the ferocious Indian Talwar and was reviled by the French who protested its use due to the horribly destructive wounds it inflicted. In fact, this saber was so successful as a cutting weapon, that the German Cavalry continued to use it right up to the beginning of the 20th century!
If you want a combat quality saber that will pass the British Proof Test and is fully capable of shearing off arms and even legs with a single blow, this is a must have! It comes fully sharpened with a wood and leather scabbard with steel mounts.
The 1796 Light Cavalry Saber comes with a wood/leather scabbard featuring steel mounts and fittings.
Ground shipments only. No sales outside USA.

More about 1055 Carbon steel:
1055 steel is right on the border between a medium and a high carbon steel, with a carbon content between 0.50%-0.60% and with manganese between 0.60%-0.90% as the only other component. The carbon content and lean alloy make this a shallow hardening steel with a quenched hardness between Rc 60-64 depending on exact carbon content. These combination of factors make this one of the toughest steels available because, when quenched, it produces a near saturated lathe martensite with no excess carbides, avoiding the brittleness of higher carbon materials. This steel is particularly blades of almost legendary toughness.